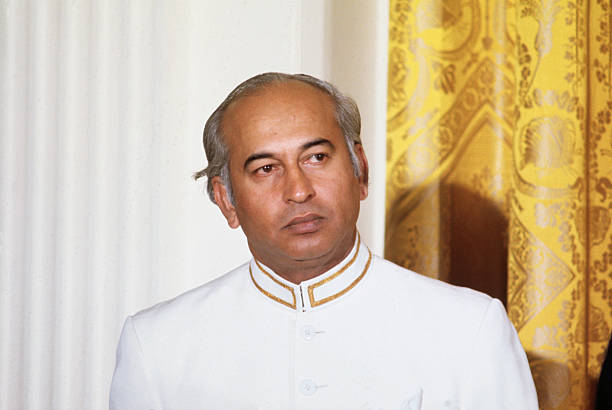 Zulfikar Ali Bhutto was the Prime Minister of Pakistan from 1973 to 1977, in the wake of filling in as President from 1971 to 1973, and the originator of Pakistan People’s Party.

A Sindhi landowner, Bhutto was taught at Oxford and Berkeley, and called to the bar at Lincoln’s Inn. Entering governmental issues, he turned into a bureau serve at 30, and was selected Foreign Minister in 1963, as a protégé of military ruler Ayub Khan. Dropping out over the Indo-Pakistani conflict of 1965, Bhutto headed out in different directions from Ayub in 1966. He hurriedly composed The Myth of Independence a year after the fact, his original work on Pakistan’s international strategy.

Following one more conflict with India and the withdrawal of Bangladesh in 1971 (for which Bhutto’s naysayers consider him somewhat liable), Bhutto became President of Pakistan that very year. He passed the country’s present constitution in 1973, and established Pakistan’s atomic program, but on the other hand was faulted for mistreating his political adversaries, just as monetary bungle.

Bhutto was removed in a tactical upset in 1977, and condemned to death by the Supreme Court in 1979, for approving the homicide of a party nonconformist. He composed If I Am Assassinated during his imprisonment, carrying the original copy out of his prison cell. He was executed on 4 April, 1979. Observer to Splendor, an aggregation of Bhutto’s declaration under the steady gaze of the courts, was distributed post mortem.